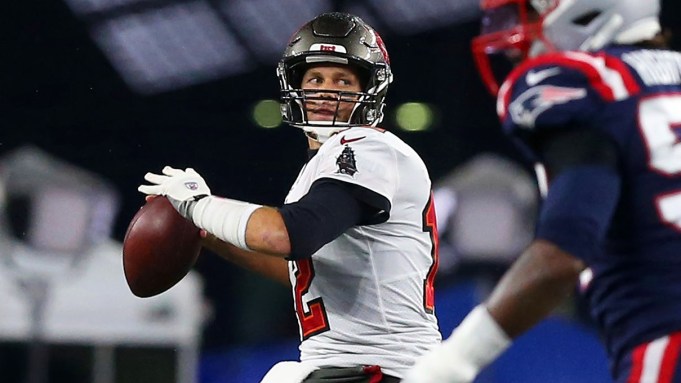 The game between the Tampa Bay Buccaneers and New England Patriots draws more than 28 million viewers.

(The Hollywood Reporter) — Tom Brady’s first game against his long-time team drew a huge audience for NBC on Sunday night.

Brady and the Tampa Bay Buccaneers’ 19-17 win over the New England Patriots delivered the biggest Sunday Night Football audience for NBC since late 2012 and is on track to be the second most-watched game in the 15-year history of the franchise.

Based on time zone-adjusted fast national ratings from Nielsen, the game drew 27.2 million viewers on NBC and 28.5 million across all platforms. The 1.3 million viewer average (via Adobe Analytics) on Peacock and digital and mobile properties for NBC Sports, the NFL, the two teams and Yahoo Sports is the largest for any NFL game on NBC (not including Super Bowls).

The fast national ratings do not include out of home viewers; NBC’s TV audience will likely improve some in the final nationals, due for release Tuesday morning.

Sunday Night Football has only drawn a bigger audience once — a Dec. 30, 2012 game between the Dallas Cowboys that decided the NFC East title averaged 30.3 million viewers. Sunday’s game is currently up by a whopping 80 percent over the same week last year (15.08 million viewers). More than a third of TV homes that had their sets on Sunday night watched the game, per Nielsen, the largest share in SNF‘s history.